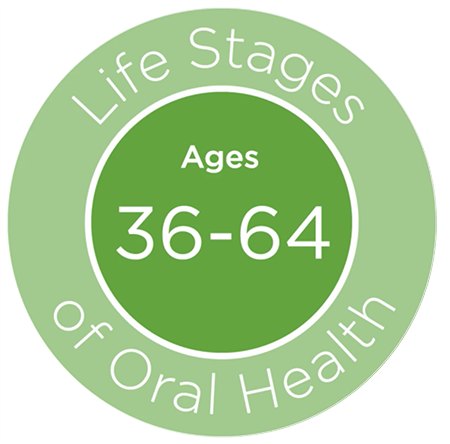 Peggy is “somewhere in her 50s.” Not only is she taking care of her parents, she’s also raising teenagers. Even though she has her hands full, it’s important for Peggy to take steps now to ensure that her mouth and teeth stay healthy as she ages.

Peggy keeps a lot of dairy products on hand. Yogurt, milk and low-fat cheese are her favorites (along with the occasional bowl of ice cream). She likes how all of those foods taste, but the real reason she snacks on them is for the calcium boost. Second only to adolescents, women ages 51 and older need the most calcium – 1200 mg per day. Peggy’s mother suffers from osteoporosis, which causes bones to weaken. This includes the jaw bone, which can lead to tooth loss. To try to prevent this from happening to her, Peggy eats salmon and leafy greens, two other great calcium sources. To help keep her bones strong, she does weight-bearing exercises like walking and weight training most days. Your body also needs vitamin D to absorb calcium. Peggy isn’t sure she gets enough sun or dietary vitamin D, so she takes a daily vitamin D supplement.

Oral cancer is another medical risk that becomes more prevalent as people age. The number of people suffering from the disease increases after the age of 35 and half of all cases occur in people older than age 68. Oral cancer affects twice as many men as women.

Peggy has never smoked, making her less at-risk than habitual tobacco users. In fact, smokers are six times more likely to develop oral cancer than nonsmokers – which is just one of the many reasons to never start.

Even longtime smokers have something to gain by quitting: The heart rate improves just 20 minutes after the last cigarette. After a year, the added risk of coronary heart disease drops to half that of a smoker’s.

Other things that increase the risk for oral cancer include:

Peggy knows that the people whose cancer is discovered at an early stage have the best survival rate, so she is diligent about getting screened on a regular basis.

Because she has never smoked and has made an effort to eat well and exercise often, Peggy’s overall health looks good. She has friends, though, who have been hit with a one-two punch of gum disease and heart disease or gum disease and diabetes.

This is largely because lifestyle choices such as an unhealthy diet, lack of exercise and smoking can increase the risk of many diseases, including gum disease. Due to these shared risk factors, studies show that more people with diabetes have gum disease, while people with gum disease are up to two times more likely to have type 2 diabetes. People who control their diabetes with diet and exercise tend to have less gum disease than those who don’t keep blood sugar in check with healthy eating and regular exercise.

Be Happy With Your Smile

After decades of daily coffee drinking, Peggy noticed that her teeth weren’t as white as they’d once been. Her dentist said that this is pretty common in coffee drinkers, smokers and people who drink tea and/or red wine.

Peggy’s dentist gave her a few options for lightening her smile, including bleaching and veneers. She opted for an in-office whitening treatment, which took just a couple of bleaching appointments.

As Peggy gets older, her oral health is a lot like her overall health: Taking a few preventive measures now can show real benefits when she’s in her 70s, 80s and 90s.